Expansion of the Celts during the first millennium BC

The historical Celts were a diverse group of tribal societies in Iron Age Europe. Proto-Celtic culture formed in the Early Iron Age in Central Europe (Hallstatt period, named for the site in present-day Austria). By the later Iron Age (La Tène period), Celts had expanded over a wide range of lands: as far west as Ireland and the Iberian Peninsula, as far east as Galatia (central Anatolia), and as far north as Scotland.

The Celtic languages form a branch of the larger Indo-European family. By the time speakers of Celtic languages enter history around 400 BCE (Brennus's attack on Rome in 387 BCE), they were already split into several language groups, and spread over much of Central Europe, the Iberian peninsula, Ireland and Britain.

Some scholars think that the Urnfield culture of northern Germany and the Netherlands represents an origin for the Celts as a distinct cultural branch of the Indo-European family. This culture was preeminent in central Europe during the late Bronze Age, from c. 1200 BCE until 700 BCE, itself following the Unetice and Tumulus cultures. The Urnfield period saw a dramatic increase in population in the region, probably due to innovations in technology and agricultural practices. The Greek historian Ephoros of Cyme in Asia Minor, writing in the fourth century BCE, believed that the Celts came from the islands off the mouth of the Rhine who were "driven from their homes by the frequency of wars and the violent rising of the sea".

The spread of iron-working led to the development of the Hallstatt culture directly from the Urnfield (c. 700 to 500 BCE). Proto-Celtic, the latest common ancestor of all known Celtic languages, is considered by this school of thought to have been spoken at the time of the late Urnfield or early Hallstatt cultures, in the early first millennium BCE. The spread of the Celtic languages to Iberia, Ireland and Britain would have occurred during the first half of the 1st millennium BCE, the earliest chariot burials in Britain dating to c. 500 BCE. Over the centuries they developed into the separate Celtiberian, Goidelic and Brythonic languages.

The Hallstatt culture was succeeded by the La Tène culture of central Europe, and during the final stages of the Iron Age gradually transformed into the explicitly Celtic culture of early historical times. Celtic river-names are found in great numbers around the upper reaches of the Danube and Rhine, which led many Celtic scholars to place the ethnogenesis of the Celts in this area. 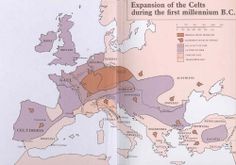 Irish Language in Ireland: From Goídel to Globalisation
The Celtic World